The Swedish krona (SEK) is the official currency of Sweden, and even though Sweden is a comparatively small economy with just 10 million inhabitants, the Swedish krona is included in the top-10 list of the world’s most frequently traded currencies. Data from the year 2018 show it to be on spot #9.

However, none of the top-10 traded currency pairs for 2018 involves the SEK. 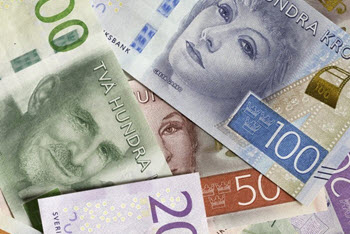 Short facts about the Swedish krona

Krona is the Swedish word for crown. The plural form of krona is kronor.

The monetary policy of Sweden is decided by Sveriges Riksbank, the central bank of Sweden. Since 19 November 1992, the bank has upheld a managed float regimen.

Sweden is a member of the European Union, but not a part of the Eurozone. In 2003, a consultative Swedish referendum were held were 55.9% of the votes were against Eurozone membership. According to the 1995 accession treaty, Sweden is required to join the Eurozone as soon as the country meets the convergence criteria. Once of these criteria is a prior two-year ERM II membership, and Sweden has so far successfully avoided Eurozone inclusion by simply not joining ERM II.

Swedish krona vs. the Euro

The weakest the krona has been to the Euro since the launch of Euro banknotes and coins in 2002 is 1 EUR = 11.6465 SEK. This happend on 6 March, 2009. The strongest SEK:EUR exchange rate so far occured on 13 Augusti, 2012, when1 EUR = 8.2065 SEK. This strong valuation of the Swedish krona against the Euro was caused by the debt crisis in Greece, and fears of similar problems surfacing in Italy and Spain.

In 1991-1993, Sweden experienced its most severe recession since the 1930s, and in November 1992, the fixed exchang rate regime of the Swedish krona collapsed.

In the fall of 1992, the Swedish krona began to decline. The Swedish central bank, eager to maintain the fixed exchange rate regime, took various drastic steps which culminated in setting a target for their prime lending rate at a whopping 500%. The bank sold huge amounts of short-term government securities, but failed to prevail against the market forces. Eventually, the prime lending rate was lowered, and the market reacted with a huge selling of SEK and SEK denominated papers.

In January 1993, the Governing Board of the central bank unveiled a new monetary policy regime based on a floating exchange rate and inflation target. The new policy was largely inspired by the Bank of Canada policy, since Canada had previous experience in succefully controlling inflation while being heavily subjected to foreign exchange rate swings.